This Post Is Only For Strong Stomachs--Viewer Discretion Advised

Day #4 was the best day since before his surgery. As mom says, "He got his piss and vinegar back!"👏🏽 Cam was more alert and determined to get on his feet! First thing he said in the morning was, "Mom, what do I have to do get out of here!?
The two requirements to be discharged from the hospital were first, to be able to physically get to the bathroom on his own, and second, to be able to have a bowel movement all on his own!
His audacity came back and he miraculously was helped up on his feet and he slowly made it to the bathroom, but it was no walk in the park. It was an incredibly hard feat. With no feeling in his left leg and his right arm, the nurses got him a walker and manufactured an arm rest to accommodate his nerve damage and palsy in his arm. The nurses started him on nerve healing medication and he is feeling more every day. 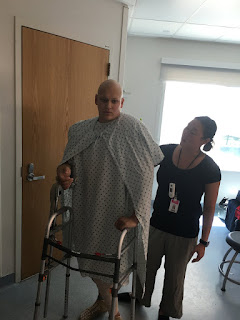 With fire in his eyes, Cam set his goal and far surpassed it.  Cameron blew everyone away as he bolted down the hallway 6 days after his surgery determined to get out of the hospital and get home. All the tenacity he had in football he now has fighting this fight!🙏🏽

All of the nurses were astounded to see him after being practically bedridden to crutching down the halls of Primary's singing "This Is How We Do It!" Cameron is back with all the piss and vinegar he had during his football seasons! Don't mess with Forte! After 3 blood transfusions, his blood counts are good and his platelets are coming up on their own. He had several visitors including Austin, Keaton, Whitney and Jaden.  Cam had to eat before his physical therapy and Mom knew he wouldn't feel as comfortable if she fed him like usual with his friends there so she put Austin in charge and he made it so fun. Cameron was laughing and having a blast! Cam's many great friends have been such tender mercies. More like angels!😇


Cameron is now a Bionic Man! After a few days, the Man, Dr. Lor Randall, Cam's Surgical Oncologist, came to change his dressings and we got a nice view of his masterpiece! 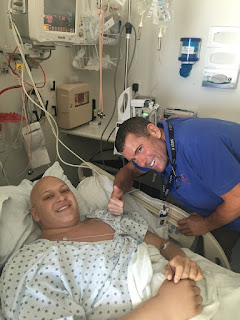 The picture below is extremely graphic but if I can handle it as his wussy, blood-fearing, older sister, then you can too! Sit down for this one.

I am giving you a second warning.
If you get grossed out… Do not look at the next picture🙈 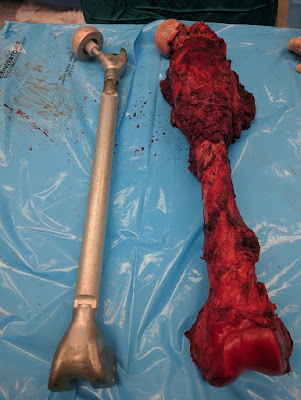 Here a picture of Cameron's old femur with the 40% left of the tumor encapsulated in a thin layer of muscle alongside his new femur, partial hip joint, and knee. UNBELIEVABLE.
The surgical team built Cam's new leg at the time of surgery to make sure that it was the same length as his old one. Thank goodness for technology and modern medicine!

All disease has been removed! 👏🏽🙏🏽

His original Rod from repair of his broken femur, nine months ago… Is still inside of that bone…
Found out two weeks ago that the rod was a conduit for the cancer cells. Dr. Randal didn't want to mess with the original hardware for fear that it would spread the cancer. It only takes one cell! Dr. Randall is full of metaphors and used one to describe what would have happened if he touched it. He said, it's like a fork in a steak. When you pull out the fork, the grease just spreads!
Long story short, they removed everything.
Another metaphor he used was that we just did nuclear warfare on our boy and now we will be going in with ground troops for six more months of chemotherapy to hopefully annihilate this disease forever! CAM IS IRONMAN! 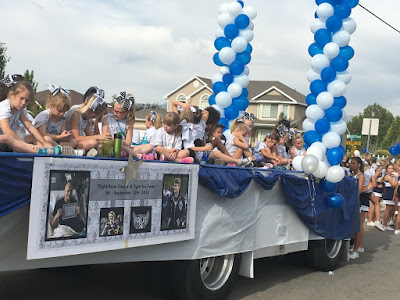 This weekend has been a difficult one, but it didn't keep Cam from going out and having fun! On Friday, Cam went to Draper Days and his friends carted him around in his "Mercedes Benz" wheelchair. This chair is incredible. It is very complex and comfortable, so Cam says. 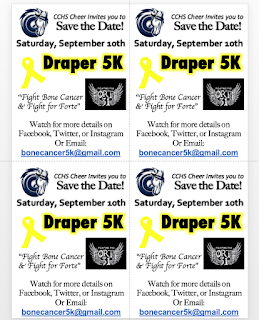 There was a float dedicated to Cam by the CCHS Cheer Squad in the Draper Days Parade on Saturday morning. The float had the date and time of a 5K they are hosting on September 10th for Cam. The 5k is called "Fight Bone Cancer & Fight For Forte" and they will continue to post updates on Facebook for more details. Our family was not even aware of it but it was so sweet and warmed our hearts. Cam being wiped out from the evening before, heard about the float and decided to muster up his strength to stand up and get in the car to go see it. Getting into the car takes anywhere from 5-10 minutes being that his right arm and his left leg are debilitated. Cam and my Mom made it for the end of the parade and he was able to see his float. 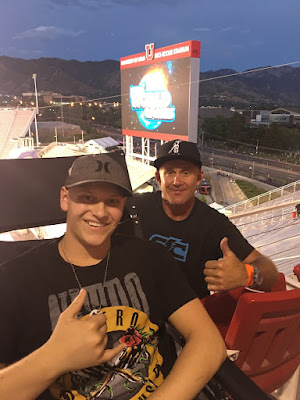 Gregg Godfrey gave Cam tickets to go to the Nitro World Games and he took Keaton and my parents. There was a designated area with handicapped accessibility and turns out they were prime seating with the view of the entire ramp. The athletes would land all of their tricks directly in front of their seats. Not a bad way to spend his Saturday night.

If you have the desire, you can donate to support Cam's fight here!

"Don't you quit. You keep walking. There is help and happiness ahead. Some blessings come soon. Some come late. But for those who embrace The Gospel of Jesus Christ - they come. It will be alright in the end. Trust in God, and believe in good things to come." -Jeffrey R. Holland

"Ye cannot behold with your natural eyes, for the present time, the design of your God concerning those things which shall come hereafter, and the glory which shall follow after much tribulation." -D&C 58:3

Cameron before this nightmare began...